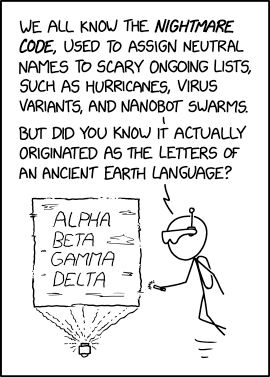 [A Cueball-like person is giving a presentation while wearing futuristic gear, including a visor with an antenna rising from it, a backpack-like appliance of some kind, and a futuristic pointer. The audience is not pictured. The presenter is floating rather than standing. The presentation is projected from a small device near the bottom of the frame, and the appearance of the presentation suggests it is a hologram. The content of the slide shows the names of the first four letters of the Greek alphabet:]

Presenter: We all know the Nightmare Code, used to assign neutral names to scary ongoing lists, such as hurricanes, virus variants, and nanobot swarms.

Presenter: But did you know it actually originated as the letters of an ancient Earth language?