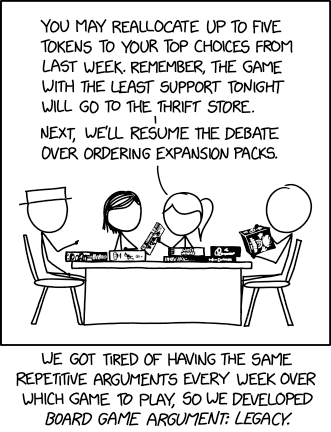 [White Hat, Megan, Ponytail, and Cueball are sitting around a table that is covered with board game boxes. White Hat is pointing at Ponytail. Both Ponytail and Cueball are holding boxes.]

Ponytail: You may reallocate up to five tokens to your top choice from last week. Remember, the game with the least support tonight will go to the thrift store.

Ponytail: Next, we’ll resume the debate over ordering expansion packs.

We got tired of having the same repetitive arguments every week over which game to play, so we developed Board Game Argument: Legacy.