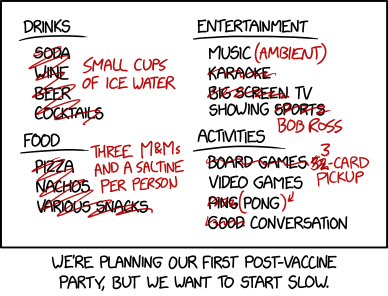 [The comic consists of four underlined headings, two by two grid, with three or four lines of text beneath each. Almost all of the original lines of text have been fully or partially crossed out (marked with below), and five new items have been added (marked with below), plus some brackets and one arrow. Even one of the added items has been modified.]

We’re planning our first post-vaccine party, but we want to start slow.