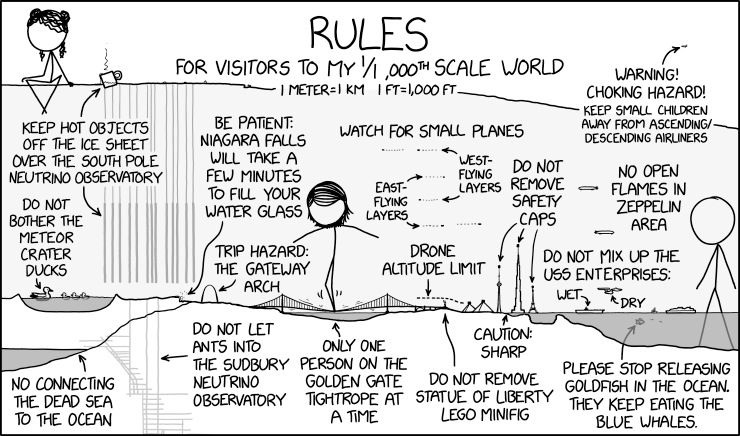 [At the top of the image, inside the panel, a large title is floating in the air.]

[Each of the following rules is written near a character or point of interest on the map.]

[Do not bother the meteor crater ducks]

[No connecting the dead sea to the ocean]

[Be patient: Niagara falls will take a few minutes to fill your water glass]

[Do not let ants into the Sudbury neutrino observatory]

[Only one person on the Golden Gate tightrope at a time]

[Do not remove statue of liberty LEGO minifig]

[Do not remove safety caps]

[Do not mix up the USS enterprises:]

[Two zeppelins float in the sky.]

[No open flames in zeppelin area]

[A fish at a size relevant to the characters in the strip faces towards two small two small horizontal lines, presumably whales.]

[Please stop releasing goldfish in the ocean. They keep eating all the blue whales.]

[An arrow points to a small line in the sky resembling an airplane.]