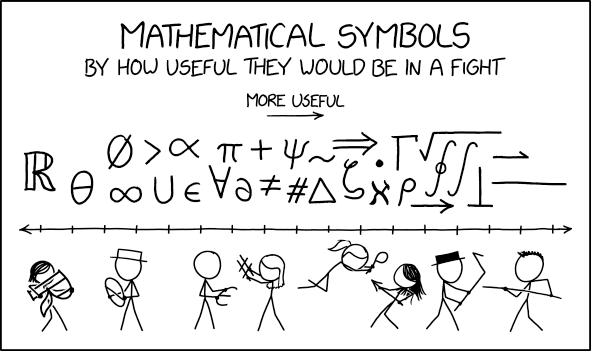 [A chart is shown with 30 different symbols arranged above a line with arrows in both ends and with 17 ticks between the arrow heads. The symbols are mostly in two rows, but the first two symbols from the left do not have another symbol above them, and towards the right there are a segment with three rows of symbols. Above the symbols there is a heading and a subheading. And beneath those there is a long arrow pointing right with a label above it.]

By how useful they would be in a fight

[Below the double arrow line are eight characters that fight each other in groups of two by using some of the symbols shown above them as weapons. They have chosen symbols that are almost above them in the chart.]

[Megan is awkwardly handling a giant “ℝ” holding it up against White Hat who is holding a “θ” (or “∅”?) with both hands, as a shield.]

[Cueball is holding an “∈” in both hands, with its “tines” pointed towards Blondie, who is swatting at him with a “#”.]

[Ponytail is leaping at Danish, swinging a “ρ” like an axe, while Danish is leaning back and thrusting a “→” back at her.]

[Black Hat is swinging a long “√” like a polearm at Hairy, who is holding a long “⎯” defensively.]