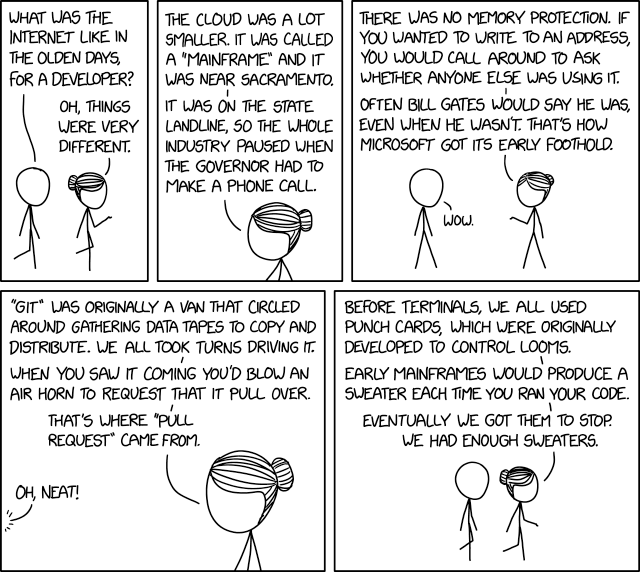 [In a slim panel, Cueball and Hairbun are walking together to the right. Hairbun has her palm raised.]

Cueball: What was the Internet like in the olden days, for a developer?

[Cueball and Hairbun have stopped walking. Zoomed in on Hairbun.]

Hairbun: The cloud was a lot smaller. It was called a “mainframe” and it was near Sacramento.

Hairbun: It was on the state landline, so the whole industry paused when the governor had to make a phone call.

[Zoomed back out. Hairbun has her palm raised.]

Hairbun: There was no memory protection. If you wanted to write to an address, you would call around to ask whether anyone else was using it.

Hairbun: Often Bill Gates would say he was, even when he wasn’t. That’s how Microsoft got its early foothold.

Hairbun: “Git” was originally a van that circled around gathering data tapes to copy and distribute. We all took turns driving it.

Hairbun: When you saw it coming you’d blow an air horn to request that it pull over.

[Cueball and Hairbun continue walking to the right. Hairbun has her palm raised.]

Hairbun: Before terminals, we all used punch cards, which were originally developed to control looms.

Hairbun: Early mainframes would produce a sweater each time you ran your code.

Hairbun: Eventually we got them to stop. We had enough sweaters.