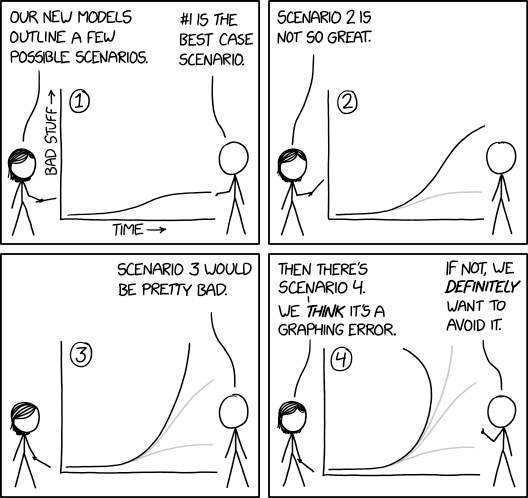 [Megan and Cueball are standing in front of a large graph, with “Time” along the horizontal axis and “Bad Stuff” along the vertical axis. The curve on the graph shows a generally shallow upward slope.]

Cueball: #1 is the best scenario.

[The graph now shows a much steeper curve, before flattening out far in the future, similar to a logistic curve.]

Megan: Scenario 2 is not so great.

[The graph now climbs quite quickly, approximating an exponential curve.]

Cueball: Scenario 3 would be pretty bad.

[The graph starts curling up, like the exponential curve, but continues curving back, so that it no longer qualifies as a function, and may indicate time-travel to the past.]

Megan: Then there is scenario 4.

Cueball: If not, we definitely want to avoid it.