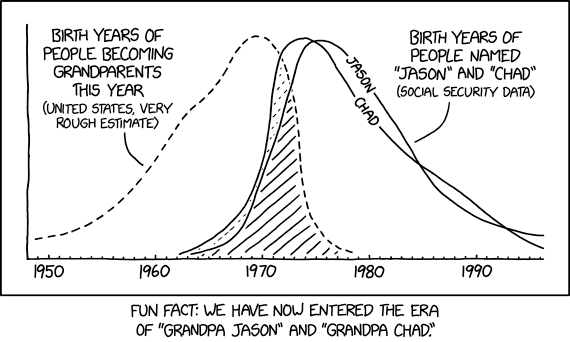 [A progression chart covering the period of years between 1950 to 1995. One line, representing the birth years of people becoming grandparents, is dotted and begins low at the start, climbs, then steeply declines. Two solid lines, representing the birth years of people named “Chad” or “Jason”, begin in the early 1960s, rise almost concurrently, however one declines steadily while the other has a curve almost before the end of the chart. The overlapping area between the dotted and solid lines is shaded. The lines show the following data:]

[Caption below the comic:]

Fun fact: We have now entered the era of “Grandpa Jason” and “Grandpa Chad.”