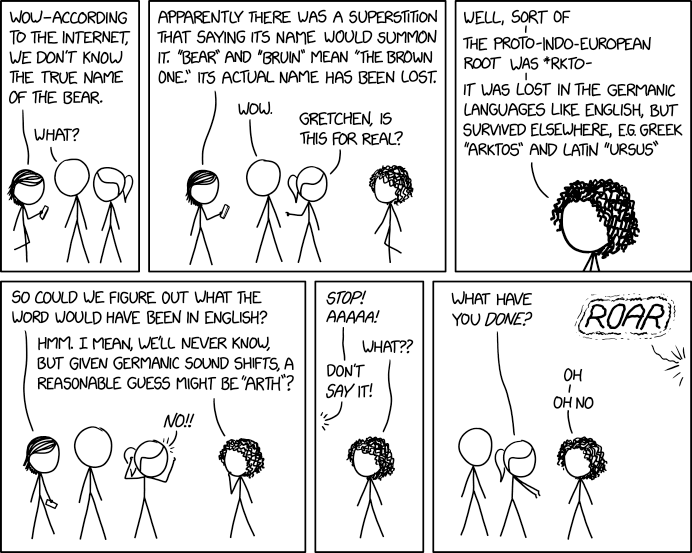 [Megan walks in front the left, looking down at her phone. Cueball and Ponytail are standing next to each other.]

Megan: Wow - according to the internet, we don’t know the true name of the bear.

Megan: Apparently there was a superstition that saying its name would summon it. “Bear” and “bruin” mean “the brown one.” Its actual name has been lost.

Ponytail: Gretchen, is this for real?

Gretchen: The Proto-Indo-European root was *rkto-

Gretchen: It was lost in the Germanic languages like English, but survived elsewhere, e.g. Greek “arktos” and Latin “ursus”

[Back to the second panel, with Megan holding her phone down, Ponytail with her hands in the air, and Gretchen with her hand on her chin.]

Megan: So could we figure out what the word would have been in English?

Gretchen: Hmm. I mean, we’ll never know, but given Germanic sound shifts, a reasonable guess might be “arth”?

[The panel zooms in again to Gretchen.]

[Ponytail is holding her palms out. Megan is no longer in the panel.]

Ponytail: What have you done?