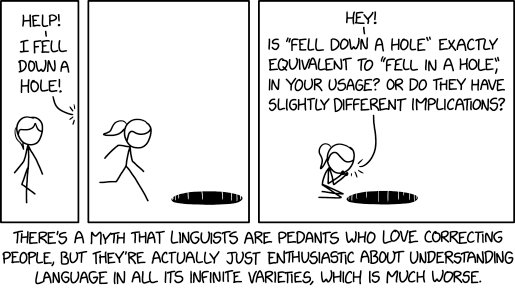 [Ponytail is walking to the left. A voice calls out from behind her (at the right of the panel):]

Off-panel voice: I fell down a hole!

[Ponytail runs to the right, toward the hole.]

[Ponytail, kneeling down next to the hole, calls out:]

Ponytail: Is “fell down a hole” exactly equivalent to “fell in a hole,” in your usage? Or do they have slightly different implications?

[Caption below the panel]

There’s a myth that linguists are pedants who love correcting people, but they’re actually just enthusiastic about understanding language in all its infinite varieties, which is much worse.