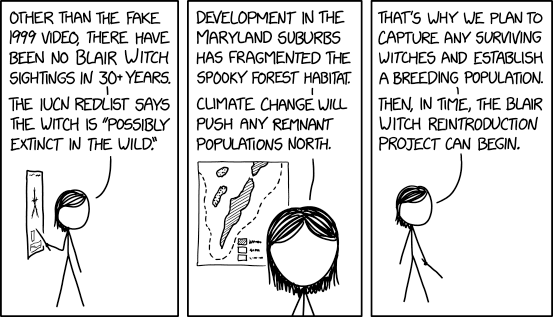 [Megan is standing in front of a screen looking away from it at an audience off-panel. She is holding a stick, pointed at the chart behind her. The chart shows the stick figure from The Blair Witch Project. Above is an unreadable line of text, and below are two smaller rectangles a smaller one above the other, the small seems to be empty, but there seems to be some kind of graph in the bottom one.]

Megan: Other than the fake 1999 video, there have been no Blair Witch sightings in 30+ years.

Megan: The IUCN redlist says the witch is “possibly extinct in the wild.”

[A close-up of Megan’s face. The screen now shows a habitat map, with four separate shaded areas enclosed in a dotted line. The dotted line and one of the areas goes to the upper edge of the screen indicating they continue beyond the shown area. Beneath the dotted line and to the right there are three small squares, one of them clearly shaded the same way as the areas above. Next to each there is an unreadable label.]

Megan: Development in the Maryland suburbs has fragmented the spooky forest habitat.

[Back to the original setting, Megan is standing with the stick pointing downwards, and the chart is out of frame.]

Megan: That’s why we plan to capture any surviving witches and establish a breeding population.

Megan: Then, in time, the Blair Witch Reintroduction Project can begin.