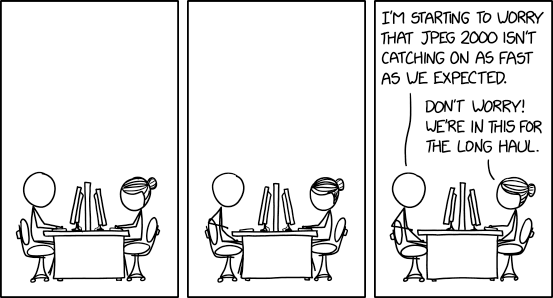 [Cueball and Hairbun are sitting on office chairs opposite each other on a shared desktop with a small division wall between them. They are both working on their own respective computers.]

[Cueball leans back and stops typing. Hairbun continues to type.]

[Cueball makes a statement as he looks over at Hairbun who looks back at him when she replies. She has moved one hand off the keyboard down to her lap. Cueball’s keyboard has disappeared!]

Cueball: I’m starting to worry that JPEG 2000 isn’t catching on as fast as we expected.

Hairbun: Don’t worry! We’re in this for the long haul.