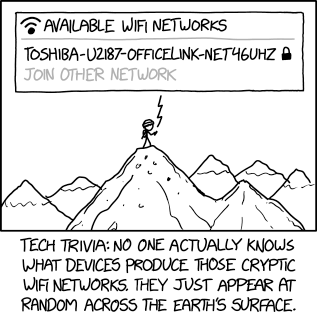 [Knit Cap (who has a backpack) is checking a phone at the highest mountain in a mountainous landscape, with 5 snow covered mountain peaks behind, and a smaller peak connected to and just below that one. There seems to be no snow on those two peaks. Above is a view of the phone’s screen as indicated with a zigzag line from the phone’s screen to the frame with text. There is also a wifi icon at the top left and a padlock icon at the end of the second line of text. The bottom line is a gray font.]

Tech Trivia: No one actually knows what devices produce those cryptic WiFi networks. They just appear at random across the Earth’s surface.