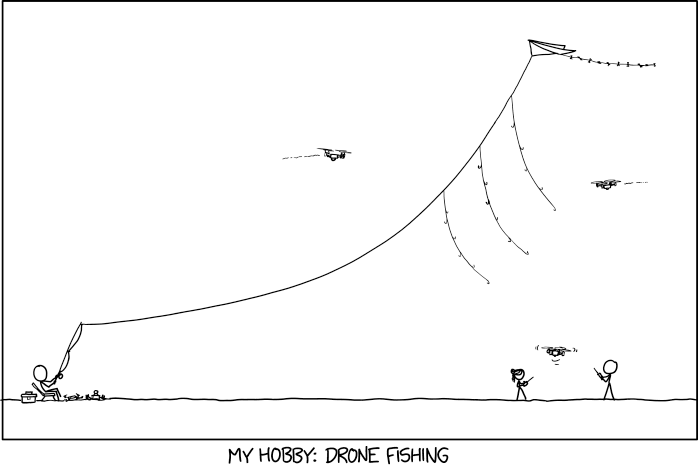 [Cueball is seated in a leaning chair, with a tackle box behind it and two drones lying on the ground in front of him. He is holding a fishing rod from which he is flying a kite on a long string. The kite is high up in the air and far away from Cueball. On the long string there are three smaller lines dangling below the string closer to the kite that to Cueball. Each line has six hooks evenly spread out, from a bit beneath the string to the end of the lines. Three quadcopter type drones are in the air nearby, with Science Girl and a Cueball-like kid standing right beneath the kite holding remote-controls for their respective drones. They are facing each other, the Cueball-like kid looking up, whereas Science Girl seems to be looking at the drone right in front of her, between and just above the kids. It has just begun to rise up as shown by lines beneath it. The two other drones are on either side of the kite line, both flying towards the hooks. Whoever controls the third drone must be off panel, and it is not clear which of those two the kid is controlling. The only text is a caption below the panel:]