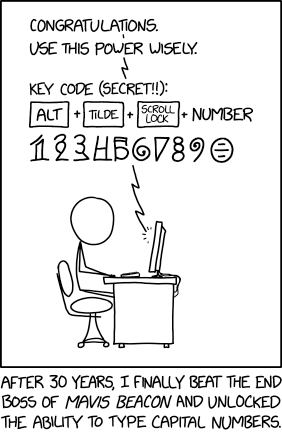 [Cueball is sitting in an office chair at his desk in front of his computer reading a message that is shown coming from the screen with a zigzag line, going to the text above him. The two upper lines (of five) are separated from the lines below, but connected with a small zigzag line. The computer short cut is written in three boxes. The last line is the numbers from 1 to 9 and 0, in a highly stylized format but recognizable in this context. The digits are shown below in their standard appearance since the stylized versions cannot be reproduced in this transcript.]

Use this power wisely.

After 30 years, I finally beat the end boss of Mavis Beacon and unlocked the ability to type capital numbers.