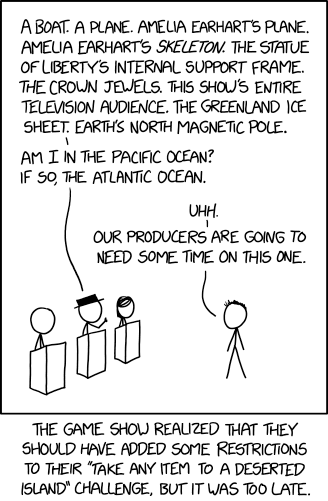 [Cueball, Black Hat, and Megan are game show contestants standing behind lecterns with Hairy standing in front of them as the game show host. Black Hat, standing in the middle of the three, is holding a finger up while speaking.]

Black Hat: Am I in the Pacific Ocean?

Black Hat: If so, the Atlantic Ocean.

Hairy: Our producers are going to need some time on this one.

The game show realized that they should have added some restrictions to their “take any item to a deserted island” challenge, but it was too late.