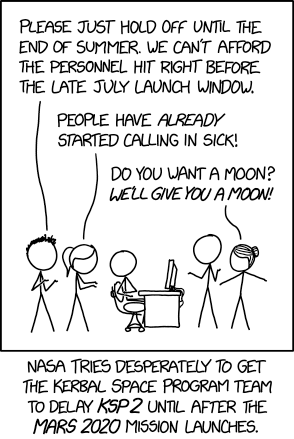 [Cueball is sitting in an office chair at his desk in front of a computer. He is surrounded by four people, and is looking over his shoulder at the ones standing behind him, Hairy - holding his palms up - and Ponytail stretching her arms out towards him. On the other side of the desk is another Cueball-like guy holding his arms out palms up and Hairbun who stretches her arms out to the side.]

Hairy: Please hold off until the end of summer. We can’t afford the personnel hit right before the late July launch window.

Hairbun: Do you want a moon? We’ll give you a moon!

NASA tries desperately to get the Kerbal Space Program team to delay KSP 2 until after the Mars 2020 mission launches.