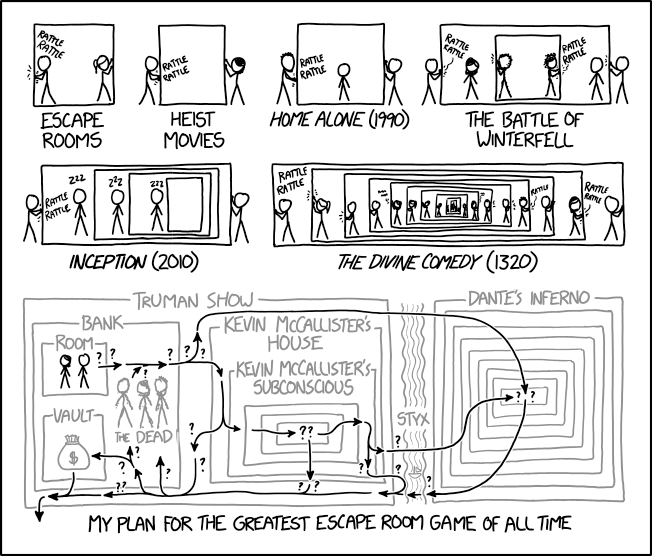 [Seven different room scenarios are shown with characters attempting to get inside or outside, each with a label below them.]

[Cueball and Ponytail trying to exit a room.]

[Cueball and Megan trying to enter a room.]

[A small version of Cueball stands in the middle of a room while a Hairy on the left and Cueball on the right are trying to enter.]

[A room is shown inside a larger room. Two characters try to enter from outside and two others try to exit from the inner room while Megan and Cueball are standing between them.]

The Battle of Winterfell

[Four rooms are shown inside of each other. Two characters try to enter from outside while three Cueballs in each room are standing while asleep.]

[Smaller rooms are recursively shown inside of larger ones, with two characters trying to escape from each.]

[At the bottom a more complicated combination of various rooms shown in gray, with arrows labeled with question marks showing escape routes for two characters in black. On the left is a large room labelled Truman Show, and on the right is the nine-level Dante’s Inferno. Between them is the river Styx. Inside the Truman Show are the Bank, which contains a Room with the two people in it, a Vault with a money bag in it, and The Dead; and Kevin McCallister’s House and Subconscious.]

[Label in the bottom in black:]

My plan for the greatest escape room game of all time