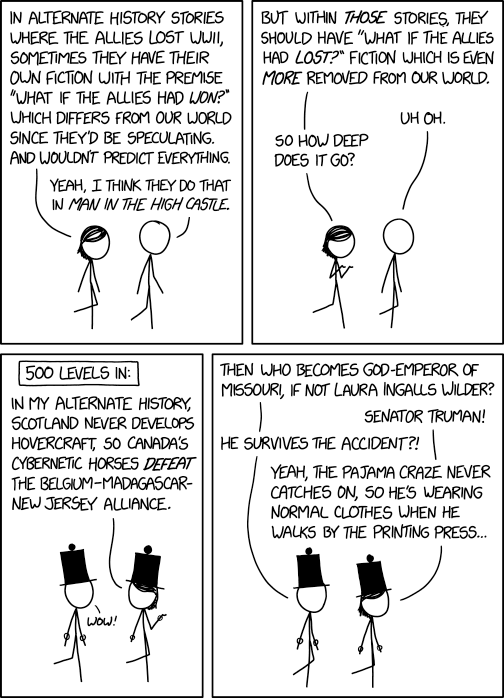 [Megan and Cueball are walking together]

Megan: In alternate history stories where the allies lost WWII, sometimes they have their own fiction with the premise “what if the allies had won?” which differs from our world since they’d be speculating and wouldn’t predict everything.

Cueball: Yeah, I think they do that in Man in the High Castle.

[Megan and Cueball continue walking together]

Megan: But within those stories, they should have “what if the allies had lost?” fiction which is even more removed from our world.

Megan: So how deep does it go?

[Cueball and Megan, wearing tall black ball-topped hats and large bracelets and presumably from some alternate history, are walking together. There is a caption in a frame over the top of the panel]

Cueball: Then who becomes God-Emperor of Missouri, if not Laura Ingalls Wilder?

Cueball: He survives the accident?!

Megan: Yeah, the pajama craze never catches on, so he’s wearing normal clothes when he walks by the printing press…