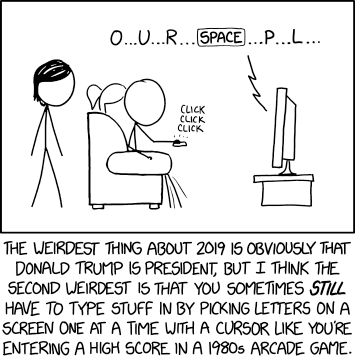 [Ponytail and Cueball are sitting on a couch, with Megan standing behind them. Cueball is pointing a remote at a television. The word space is written inside a frame.]

The weirdest thing about 2019 is obviously that Donald Trump is president, but I think the second weirdest is that you sometimes still have to type stuff in by picking letters on a screen one at a time with a cursor like you’re entering a high score in a 1980s arcade game.