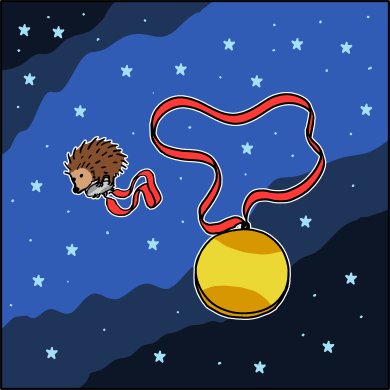 [This was an interactive and dynamic comic during April 1st from its release until its completion. But the final and current image, will be the official image to transcribe. But the dynamic part of the comic as well as the “error image” displayed to services that could not render the dynamic comic is also transcribed here below.]

[The final picture shows the winner of the gold medal in the Emojidome bracket tournament, as well as the runner up with the silver medal. There is no text. The winner is the “Space”, “Stars” or “Milky Way” emoji, which is shown with a blue band on top of a dark blue band on top of an almost black background, indicating the light band of the Milky Way in the night sky. Stars (in both five point star shape and as dots) in light blue are spread out in all three bands of color. The large gold medal with its red neck string, is floating close to the middle of the picture, lacking any kind of neck in space to tie it around. To the left of the gold medal is the runner up, the brown Hedgehog, with light-brown face. It clutches the smaller silver medal, also with red neck string, which floats out there in space. The hedgehog with medal is depicted small enough to fit inside the neck string on the gold medal.]