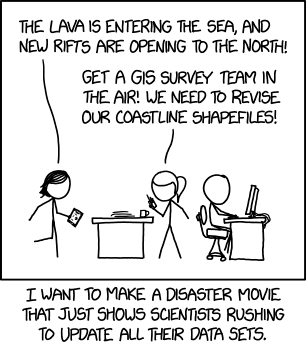 [A fraction of an office with two desks is shown. On the right Cueball sits behind a computer while in the middle Ponytail talks into a radio device with a small antenna. On the left Megan runs into the scene holding something like a tablet computer in her hand.]

Megan: The lava is entering the sea, and new rifts are opening to the north!

Ponytail: Get a GIS survey team in the air! We need to revise our coastline shapefiles!

I want to make a disaster movie that just shows scientists rushing to update all their data sets.