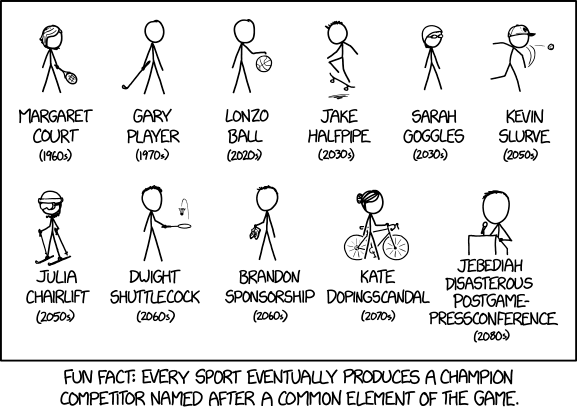 [Two rows of people wielding sports equipment are shown, six in the upper row, five in the lower, only the last has no equipment but is standing behind a lectern with a microphone attached to it. Below each person, their name is given and the decade in which they were champions of their sport is given below their name, in brackets. Here is a list of the 11 people:]

[Cueball with a golf club]

[Cueball with a basketball]

[Hairy on a skateboard]

[Woman with dark hair wearing a swim cap and goggles]

[Hairy holding a badminton racket bouncing a shuttlecock on it]

[Hairy holding a pair of shoes in his hand]

[Hairbun standing next to a bicycle.]

[Hairy standing behind a lectern with a microphone on it.]

Fun fact: Every sport eventually produces a champion competitor named after a common element of the game.