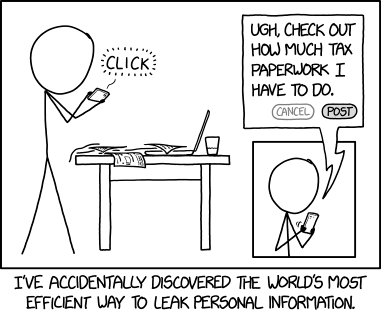 [Cueball holds his smartphone in both hands and takes a picture of his desk which has several sheets of paper (with unreadable text) lying around on it, hanging out over the edge of the table and also on top of his laptop standing on it. A more than half empty glass of water stands behind the laptop. The shutter sound is shown with small dots around it to indicate the picture is just being taken now.]

[A smaller frame is inside the main frame to the right. It shows Cueball now typing on his phone. Above the frame a “speech” box goes outside the smaller frame but points with a jagged arrow towards the phone. Inside this box Cueball’s message is displayed. At the bottom two typical social media buttons are shown, the left of them is grayed out, with gray text inside a thin gray line, the right button has dark text on a dark gray background with a solid black line around, probably to indicate that Cueball has pushed this right button at this very moment.]

Ugh, check out how much tax paperwork I have to do.