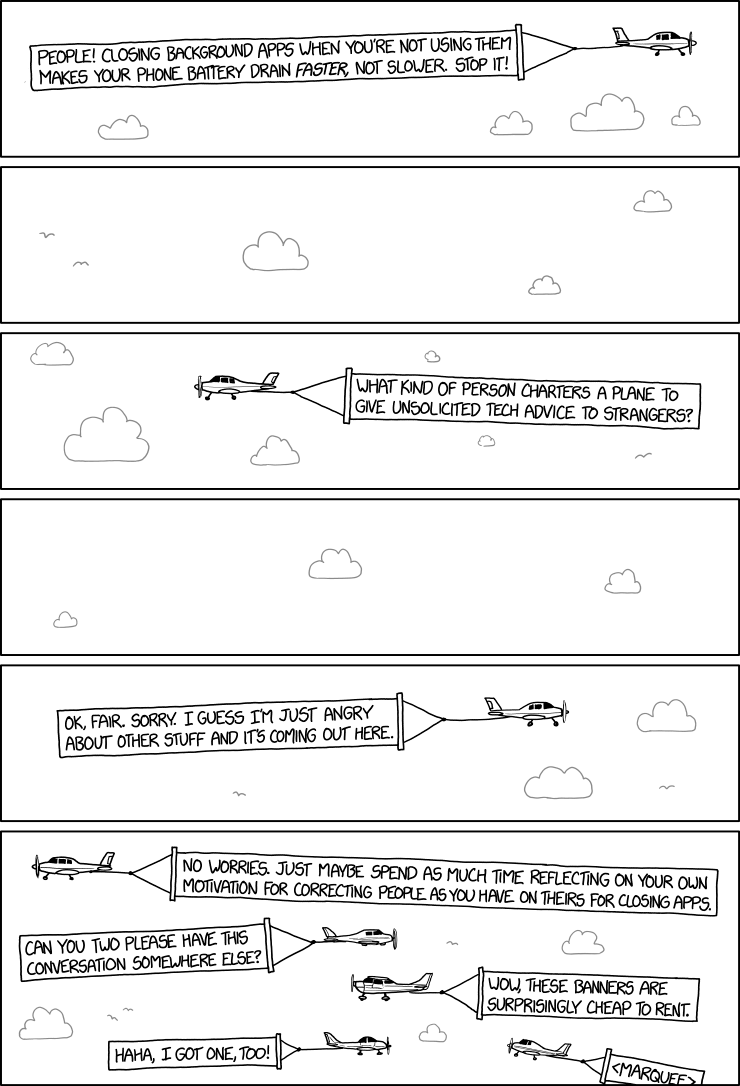 [A small airplane with a trailing banner is flying across the panel from left to right with four small clouds spread out beneath the banner. The long banner reads:]

Banner: People! Closing background apps when you’re not using them makes your phone battery drain faster, not slower! Stop it!

[A beat panel without a plane, but just the sky with two birds to the left and three clouds.]

[The same airplane flies back from right to left, trailing a new banner with clouds both above and beneath the banner/plane, and a bird to the right.]

Banner: What kind of person charters a plane to give unsolicited tech advice to strangers?

[A second beat panel follows without a plane, but just the sky with three clouds.]

[The plane returns once again from the left with another banner. Two clouds are in front/below the plane and two birds can be seen.]

[Without a beat panel the original plane returns at the top of the panel, once again returning from right to left with another very long banner. But no less than four other planes, each with smaller and smaller banners are also shown flying beneath it among three clouds and three birds. The planes alter direction so the second plane below the original planes banner is flying to the right, the third plane is right below the second flying the other way towards left, and just beneath that is the fourth plane flying to the right. A final plane is flying to the left, beneath the third planes banner, at the same height as the fourth, they look as if they are on a collision course. This last planes banner is very short and the bottom end is partly beneath the panels frame, partly obscuring the text. All five planes are clearly different types, thus making it clear that the plane from the first three panels and the top one in this panel are the same plane, hired by two different persons.]

Banner 1: No worries. Just maybe spend as much time reflecting on your own motivation for correcting people as you have on theirs for closing apps.

Banner 2: Can you two please have this conversation somewhere else?

Banner 3: Wow, these banners are surprisingly cheap to rent.