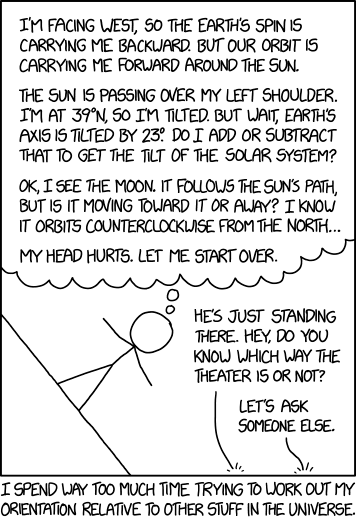 [Cueball appears to be tilted on a descending slope, with his arms held out. There is a thought bubble above his head, with the top, left and right of the bubble cut off due to its size. His thoughts are arranged into four paragraphs in the bubble.]

The Sun is passing over my left shoulder. I’m at 39°N, so I’m tilted. But wait, Earth’s axis is tilted by 23°. Do I add or subtract that to get the tilt of the Solar System?

Ok, I see the Moon. It follows the Sun’s path, but is it moving toward it or away? I know it orbits counterclockwise from the North…

My head hurts. Let me start over.

[Two off-screen voices coming from the bottom right of the panel.]

Off-screen voice #1: He’s just standing there. Hey, do you know which way the theater is or not?

Off-screen voice #2: Let’s ask someone else.

I spend way too much time trying to work out my orientation relative to other stuff in the universe.