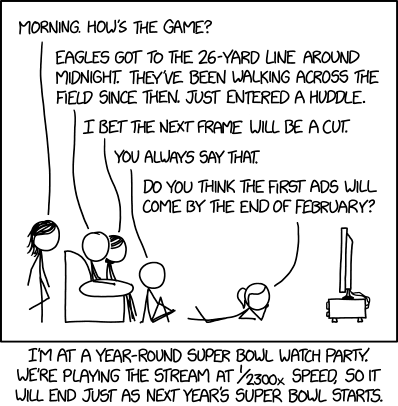 [A woman, looking like Megan, walks up to a group of people watching TV. Cueball and Megan (with shorter hair than the walking woman) are sitting on a couch. A Cueball-like guy sits in front of them, while Ponytail lies on the ground, head resting on a hand, in front of a TV, which is quite far from the couch.]

Cueball: Eagles got to the 26-yard line around midnight. They’ve been walking across the field since then. Just entered a huddle.

Megan: I bet the next frame will be a cut.

Guy on floor: You always say that.

Ponytail: Do you think the first ads will come by the end of February?

[Caption below the comic:]

I’m at a year-round Super Bowl watch party. We’re playing the stream at 1/2300x speed, so it will end just as next year’s Super Bowl starts.