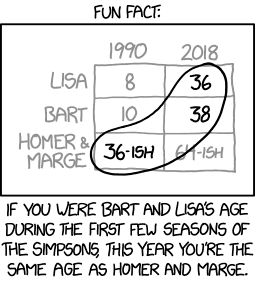 [A black frame containing a gray table of two columns and three rows. Most of the text is also gray. The columns and rows have titles. A black jellybean-shaped loop is visually grouping three entries together, the top two in the right column with the bottom left entry. The text in those three boxes are black. Above the table there is a heading:]

If you were Bart and Lisa’s age during the first few seasons of The Simpsons, this year you’re the same age as Homer and Marge.