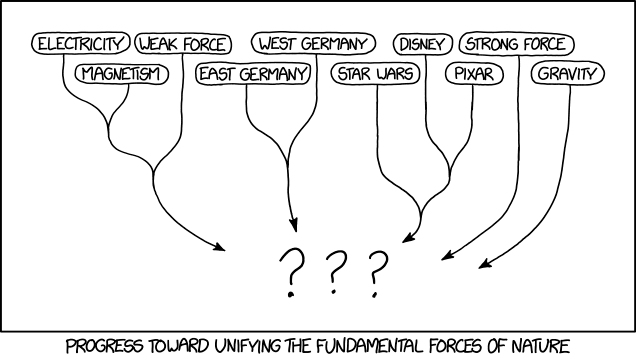 [Ten rounded frames with text inside are shown in two rows. Below each frame there is a line going down and then this line either joins with one or two of the other frames lines or in two cases do not joins with any other. At the bottom of the panel the now five remaining lines turn towards the center of the bottom of the panel and ends in arrows that points towards three question marks. The first three frames’ lines are unified, same goes for the next two, and the three after that. The lines of the last two are not joined with any other lines. The text in the transcript is given as it appears from left to right, disregarding if it is the top or bottom row, but this will alternate through the ten frames, starting with one up, then one down etc.]

[Group one, starting with up:]

[Group two starting with down:]

[Group three starting with down:]

[Two single frames, the first is up:]

[All five arrows points to this:]

Progress toward unifying the fundamental forces of nature