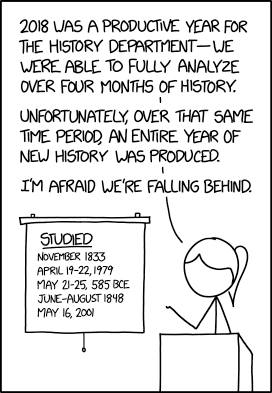 [Ponytail is standing behind a lectern holding a hand up indicating the presentation screen next to her with a list of time periods. The screen has a string ending in ring, attached to it, to pull it down.]

Ponytail: 2018 was a productive year for the history department - we were able to fully analyze over four months of history.

Ponytail: Unfortunately, over that same period, an entire year of new history was produced.