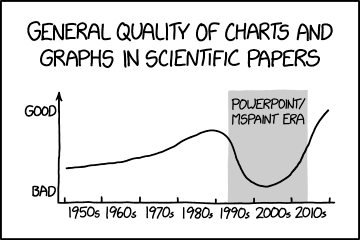 [Heading on top of the graph:]

General quality of charts and graphs in scientific papers

[A graph is shown with the y-axis on the origin labeled “bad”, on the arrowhead labeled “good”, and the x-axis being a timeline labeled with decades from 1950s to 2010s.]