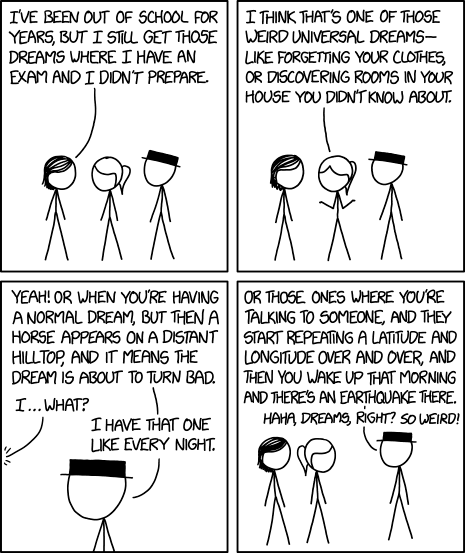 [Megan, Ponytail, and Black Hat are standing around.]

Megan: I’ve been out of school for years, but I still get those dreams where I have an exam and I didn’t prepare.

Ponytail: I think that’s one of those weird universal dreams— like forgetting your clothes or discovering rooms in your house you didn’t know about.

Black Hat: Yeah! Or when you’re having a normal dream, but then a horse appears on a distant hilltop, and it means that the dream is about to turn bad!

Ponytail or Megan (off-screen): I… What?

Black Hat: I have that one like every night.

Black Hat: Or those ones where you’re talking to someone, and they start repeating a latitude and longitude over and over, and then you wake up that morning and there’s an earthquake there.