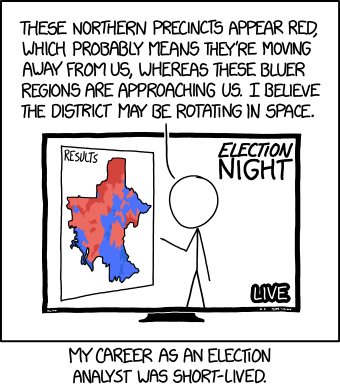 [On a TV-screen Cueball is seen pointing at a map on the left which is colored in red and blue. There is a header on the map and in the top right corner of the screen the title of the program is shown. Below this at the bottom of the screen text indicate that the program is broad live. Cueball explains the map, with his text shown above the TV.]

Cueball: These northern precincts appear red, which probably means they’re moving away from us, whereas these bluer regions are approaching us. I believe the district may be rotating in space.

My career as an election analyst was short-lived.