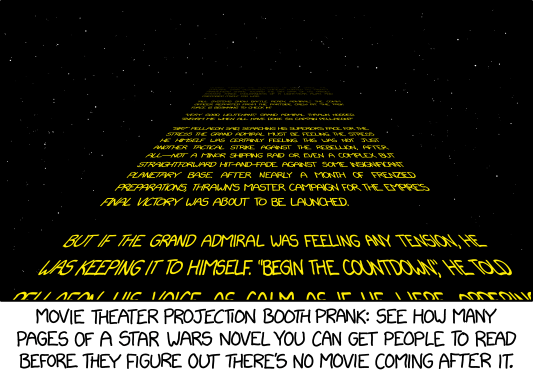 [On a black background with many stars is five blocks of yellow text that recedes towards a black section at the back of the panel. The last block cannot be read, but it is (almost) possible to read the second block of text at the back. The bottom line of the last text block is cut off through the middle of the letters.]

“All systems show battle ready, Admiral,” the comm officer reported from the portside crew pit. “The task force is beginning to check in.”

“Very good, Lieutenant,” Grand Admiral Thrawn nodded. “Inform me when all have done so. Captain Pellaeon?”

“Sir?” Pellaeon said, searching his superior’s face for the stress the Grand Admiral must be feeling. The stress he himself was certainly feeling. This was not just another tactical strike against the Rebellion, after all—not a minor shipping raid or even a complex but straightforward hit-and-fade against some insignificant planetary base. After nearly a month of frenzied preparations, Thrawn’s master campaign for the Empire’s final victory was about to be launched.

But if the Grand Admiral was feeling any tension, he was keeping it to himself. “Begin the countdown,” he told

[Cut off through the middle and at the end]: Pellaeon, his voice as calm as if he were ordering

Movie theater projection booth prank: see how many pages of a Star Wars novel you can get people to read before they figure out there’s no movie coming after it.