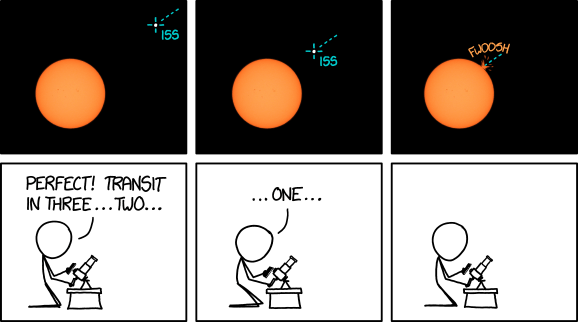 [Every panel is split into two half-height panels arranged vertically.]

[The first top panel shows an image of an orange sun on a black background with a white dot labeled in light-blue letter at the top right corner. The dot is in a light-blue cross-hair and a light-blue dotted trail is behind it as indicating movement towards the sun.] ISS

[In the bottom panel Cueball is kneeling in front of a small platform while operating a camera with a very long objective while holding a smartphone. The camera is angled sharply upward toward the sky as it is attached to a tripod standing on the platform.] Cueball: Perfect! Transit in three… two…

[The upper image is the same but the dot has halved the distance to the sun.] ISS

[Cueball sits in the panel below.] Cueball: …one…

[In the upper panel the dotted line enters the Sun and the white dot has plunged into the sun making a flare “splash” out from the surface of the Sun. This makes a sound written in orange letters.] Fwoosh

[Cueball sits silent in the panel below.]