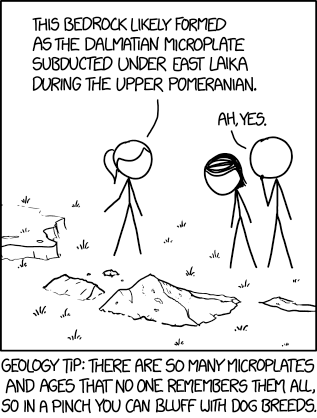 [Ponytail is gesturing toward some rock formations in a grass field while addressing Megan and Cueball who are looking down at the rocks, Cueball with a hand to his chin.]

Ponytail: This bedrock likely formed as the Dalmatian microplate subducted under East Laika during the Upper Pomeranian.

Geology Tip: There are so many microplates and ages that no one remembers them all, so in a pinch you can bluff with dog breeds.