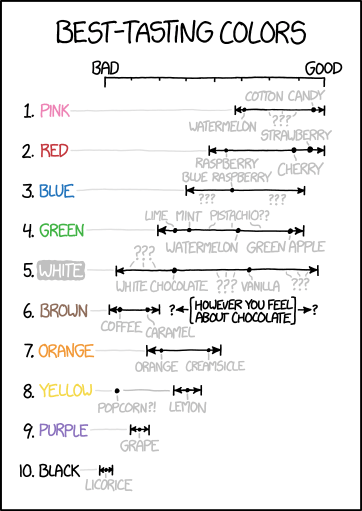 [Caption above the chart:]

[Below the caption there is a scale with two large ticks (with labels written above) at either end and seven smaller ticks in between for nine ticks in total. The labels:]

[Below the scale to the left is a numbered list of ten colors. Black double arrows goes under the scale. On the arrows there are labeled points, but there is also questions marks and other exceptions where text is not pointing to a point. Labels appear both above and below the arrows, but here the text is listed as it appears on the scale from left (bad) to right (good):]

[There is no more text from the comic below here:]

[Below the scale to the left is a numbered list of ten colors, the name of the color written in said color (white written on a gray background). From the color goes a thin gray line out under the scale. At different points and lengths along the scale there appear black double arrows pointing to two lines. The gray line never extends beyond the black arrows to the right. On the line of these arrows there are one to four points, that have all been labeled with gray text (both above and below the arrow to which the labels belong).]

[Five places on three arrows there are groups of three questions marks which relates to a region on the arrow rather than a point, either with three lines pointing to the arrow (once for pink and trice for white) or just standing close beneath the arrow (twice for blue). There are only three other exceptions.]

[First there is pistachio which has no point but has three lines going from the text to the arrow for green.]

[Second there is chocolate, which has its own double arrow where the ends do not end in lines but in questions marks. The arrow is broken by a square bracket with normal black text written on two lines within it. This arrow thus does not connect with the other “normal” arrow for brown to the left of the chocolate arrow.]

[Third there is a point that is outside the black arrow for yellow on the gray line for popcorn. That is the only place where the gray line exceeds any black markings as it is only broken by the dot and then continues further to the arrow.]