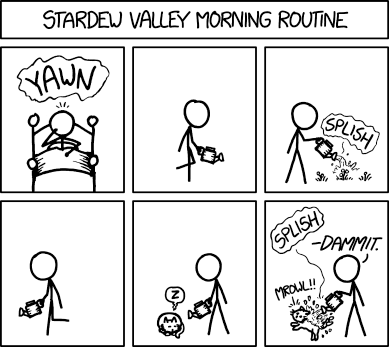 [Inside a slim frame at the top of the comic there is a caption:]

[Below this frame there are two rows each consisting of three small panels taking up the same width as the caption panel above:]

[Cueball wakes and rises up from his pillow sitting beneath his blanket in his four poster bed with round knobs. He yawns with a hand to his mouth. Above him floats a large sound bubble:]

[Cueball walks to the right with a small watering can held in front of him.]

[Cueball pours water from the can over the three small plants. A line goes from the water to another bubble:]

[Cueball walks back to the left with the watering can.]

[Cueball stops with the can right next to a sleeping cat, which has a speech bubble pointing to its head.]

[Cueball proceeds to pour water on the cat which immediately jumps up away from him trying to escape as water cascades on it. Again there is a line from the water to a speech bubble, but both the cats angry sound and Cueball’s comment is written without bubbles.]