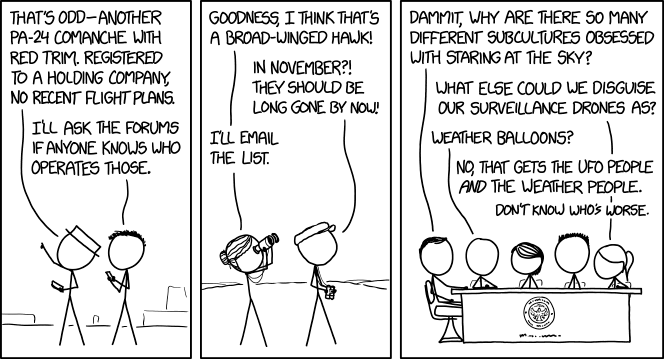 [White Hat and Hairy are standing in front of some buildings. White Hat points to the sky while holding his smartphone in the other hand, while Hairy holds his smartphone up in both hands as he looks at the screen.]

Hairy: I’ll ask the forums if anyone knows who operates those.

[Hairbun and an old man with a white sailor cap are standing in a field with rolling hills behind them. Hairbun is looking at the sky through her binoculars, which she has on a string around her neck. The man also looks up but he is holding his string attached binoculars down in front of him.]

Man with sailor cap: In November?! They should be long gone by now!

[Five people sit around a table in a boardroom, which presumably belongs to the government as the table has a circular insignia with an eagle in the center and unreadable text in the ring around the eagle and beneath the insignia. A man with slick black hair is sitting at the end of the table in an office chair. The other four are sitting behind the long side of the table; from the left they are Cueball, Megan, another version of Hairy with spikier hair, and to the right, Ponytail.]

Man at the end of the table: Dammit, why are there so many different subcultures obsessed with staring at the sky?

Ponytail: What else could we disguise our surveillance drones as?

Ponytail: No, that gets the UFO people and the weather people.