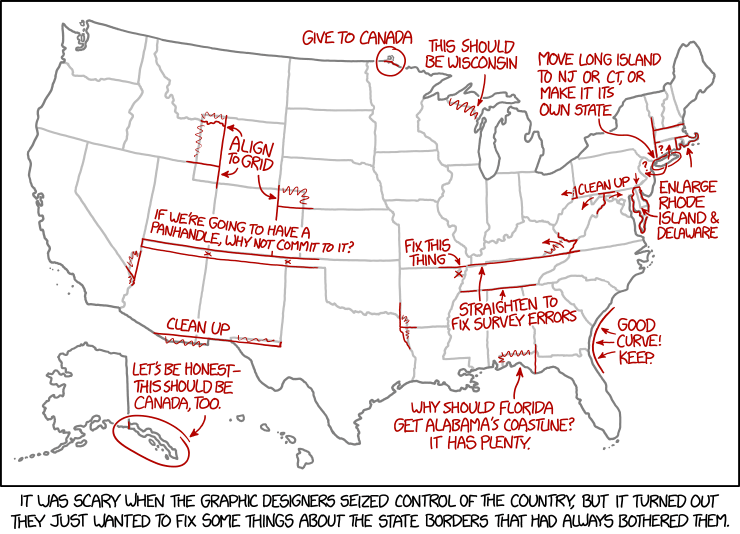 [An outline map of the United States is shown, including state boundaries. The following edit marks are shown in red text:]

[Minnesota’s Northwest Angle is circled] Give to Canada

[New York’s Long Island is circled, with arrows and question marks pointing to New Jersey and Connecticut] Move Long Island to NJ or CT or make it its own state

[The Oklahoma Panhandle has been extended west until it reaches Nevada, taking the northernmost parts of Arizona and New Mexico with it] If we’re going to have a panhandle, why not commit to it?

[The Missouri Bootheel has been given to Arkansas] Fix this thing

[The southwestern and eastern borders of Nevada have been extended into Arizona until they meet a point. A part of California is slightly extended to reach the revised border]

[Parts of northeastern Texas have been given to Arkansas and Louisiana]

[A line has been traced along the coasts of South Carolina, Georgia, and northern Florida] Good curve! Keep.

[Alaska’s southeastern panhandle has been circled] Let’s be honest - this should be Canada, too.

It was scary when graphic designers seized control of the country, but it turned out they just wanted to fix some things about the state borders that had always bothered them.