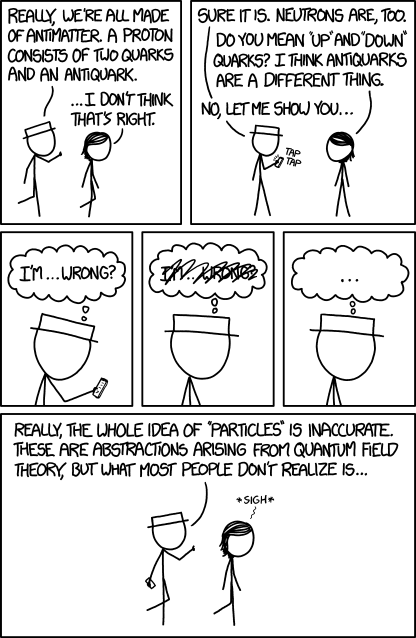 White Hat: Really, we’re all made of antimatter. A proton consists of two quarks and an antiquark.

[White Hat stops to take out his smartphone tapping on it. Megan stops and turns towards him.]

White Hat: Sure it is. Neutrons are, too.

Megan: Do you mean “up” and “down” quarks? I think antiquarks are a different thing.

White Hat: No, let me show you…

[Zooming in on White Hat’s head, while he is holding his phone up looking at it. He is thinking as shown with a bubbly thought bubble.]

[White Hat has lowered the phone. He is still thinking the same but the text has been scribbled out.]

[White Hat purges the thought from his mind]

[Similar setting as in the first panel, but in a full row wide panel, and White Hat is still holding his smartphone]

White Hat: Really, the whole idea of “particles” is inaccurate. These are abstractions arising from quantum field theory, but what most people don’t realize is…