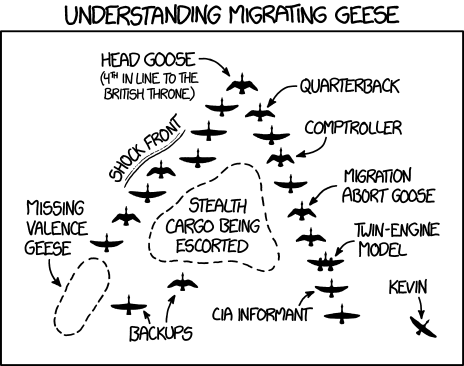 [Caption above the panel:]

[20 geese are shown flying in a typical migratory V-formation. As they are shown in silhouette it is not possible to determine if they are seen from above or from below. They are flying toward the top of the image with the first goose close to the top in the middle of the image. There is one head goose, and then there are 7 geese in the left arms and 9 geese in the right arm. Behind the left arm there are two stragglers that are not in line with the others, but closer to the middle than those above and not as close to each other as the rest but still flying in the same direction. Finally there is one goose at the bottom right corner flying at a 45 degree angle away from the other to the right. The first goose is flapping its wing, which is also the case with six other geese, no. 4 and 6 in the left and 3, 5 and 6 in the right arm as well as the middle of the two in the rear towards the middle. The rest are soaring with straight wings and all of these look the same except no. 7 in the right arm which has two tails, which both goes ahead of the wings, making it look like a plane with two engines. The head goose and 5 of the 9 geese in the right arm as well as the one bottom right are labelled with and arrow pointing to them from the label. The front goose has the label in front to the left, the other have it in front to the right, except the second last in the arm which has the label inside the V and one flying away which has the label right above it. The two behind and right of the left arm have one label behind them with two arrows from the label pointing at both geese. There is a thick curvy line in front of geese no. 3 to 5 in the left arm. In front of that line is a thinner broken line. In front of this is a label written with the same curvature. There are two areas surrounded by dotted lines. The first one is behind the last of the left arms geese, extending in the same direction for a distance of about two geese. It has a label above and left with and arrow pointing to it. The other area is in the middle of the V forming a loose triangular structure with a label inside.]