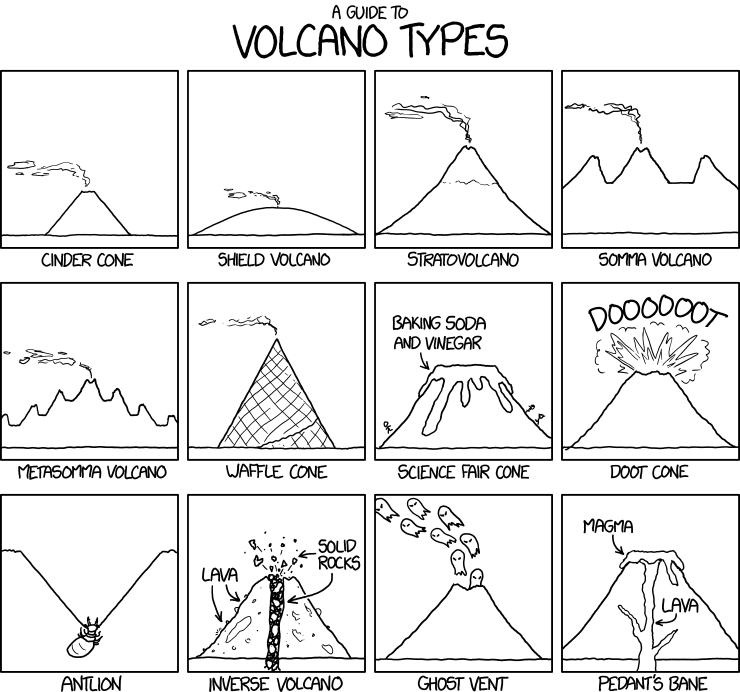 [Twelve drawings in four rows of different “volcano” types, the first four real, and some not even volcanoes of any sort, real or fake. Below each panel is a caption with the name of the drawn volcano. Some of the volcanoes have labels or sound written inside the panel. Each of the volcanoes has a baseline for the ground going straight a short distance over the bottom of each panel. All 11 volcanoes lie on top of this line, but some show the inside of the volcano going further into the ground.]

[Standard cone shaped volcano, with straight sides sloping up to a triangular shape, but with the tip of the cone cut off to form the central jagged edged crater. White smoke rises straight up and then drifts to the left forming three separate clouds.]

[Flat rounded shaped volcano, as a part of a circle. There is not a real crater visible but from the center a thin plume of smoke rises up, drift drifts to the left and forms a small white cloud.]

[This is the largest volcano. The tip of this volcano is similar to the first volcano, but with more uneven slopes and a bit smaller. The tip is clearly separated from the bottom section by a thin jagged line, and below the sides of the volcano decreases their slope, so they are less steep than the tip. Black smoke rises straight up from the crater and then drifts to the left in four thin lines.]

[The central part of this volcano is the same shape as the previous panel. This could be a zoom out, revealing that the large crater, is at the center on an even larger crater, which again is at the center of a crater that spans the panel. A plume of black smoke rises from the centeral cones crater, and drifts left as five white clouds.]

[A perfect cone-shape, triangular and steep, with checkered ice cone waffle texture, even with a line indicating where the waffle has been a folded. It looks like a road up the volcano. Black smoke drift up from the sharp tip, no crater, and drifts left forming a small cloud separated from the rest of the smoke lines.]

[Standard cone as in the first, but zoomed in so it fills the panel from left to right. The volcano’s top has been cut much further down leaving a wide crater from which lava is pouring down the sides in large rivers of different width and length. To the left one long river has almost reached the ground. Cueball is running down the left side, and Megan is running after another Cueball with his arms up on the right side. There is a label with an arrow pointing to the lava:]

[Standard cone like the previous, but with more jagged sloped and crater. This volcano erupts with a large explosion with fire and smoke coming out in all directions above the crater. A large sound is written above the explosion:]

[This is not a volcano, but the inverse, a cone down into the ground, the ground level no above the center of the panel. The slope down into this cone hole is straight, the ground above is more jagged. At the bottom of the hole sits a small animal with six legs and an open mouth piece sticking up out of the hole. Its fat body is hidden under the ground along with its legs.]

[Standard cone like the doot cone, with a crater that bends down in the middle. From this crater eight white ghosts with two black eyes are rising, like the smoke, drifting left. The highest ghost is just reaching the edge at the top left of the panel. The lowest ghost is still inside the crater with its wavy lower parts.]