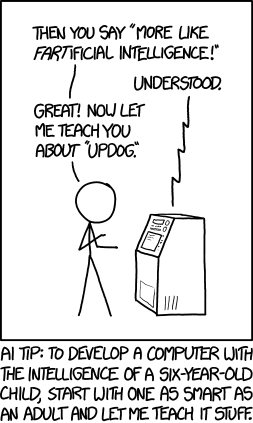 [Cueball, is gesturing, with his hands held out in front of him, towards a large computer console with several screens, buttons and unreadable text. They are talking. The computers reply is indicated to come from the console with a zigzag line, rather than the straight lines for Cueball.]

Cueball: Great! Now let me teach you about “updog”.

AI tip: To develop a computer with the intelligence of a six-year-old child, start with one as smart as an adult and let me teach it stuff.