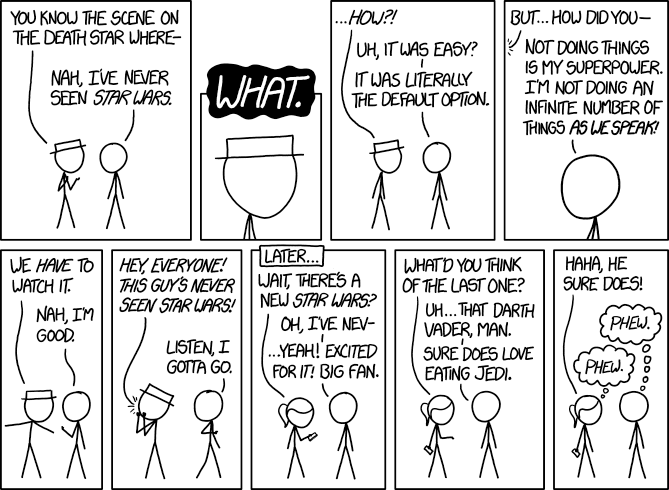 [White Hat is facing Cueball while talking to him.]

White Hat: You know the scene on the Death Star where–

[Close-up of White Hat in a smaller panel.]

[White Hat and Cueball are still facing each other.]

Cueball: Uh, it was easy?

Cueball: It was literally the default option.

[Close up of Cueball. White Hat is speaking off-panel.]

White Hat: But… How did you–

Cueball: Not doing things is my superpower. I’m not doing an infinite number of things as we speak!

[White Hat and Cueball are still facing each other.]

White Hat: We have to watch it.

[White Hat has turned away from Cueball and has his hands to his mouth to shout to people off-panel. Cueball has likewise turned away as he walks away and is speaking back over his shoulder.]

[A small caption above the single panel.]

[Ponytail is looking down at her phone in her left hand while Cueball is facing her.]

[Ponytail holds her phone to her side, transferred to her right hand, as she and Cueball face each other.]

Ponytail: What’d you think of the last one?

Cueball: Sure does love eating Jedi.

[Ponytail and Cueball continue facing each other.]

Ponytail: Haha, he sure does!