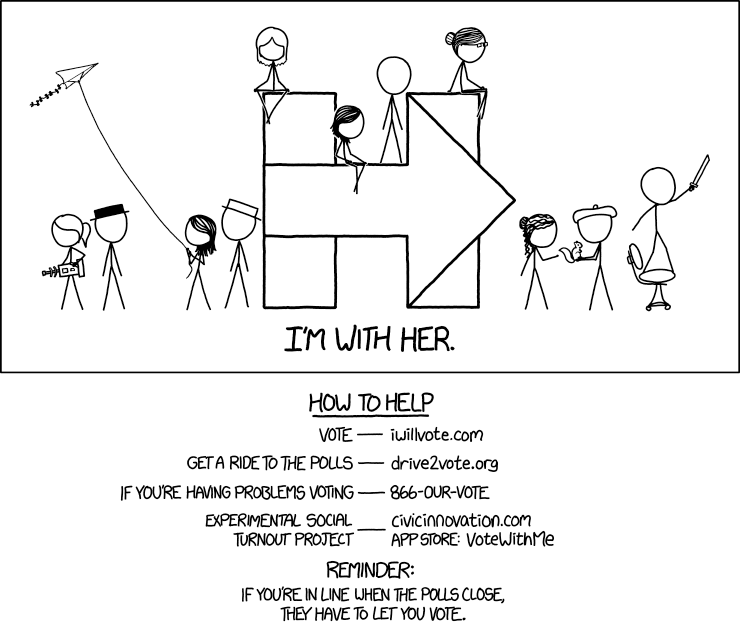 [Inset: Eleven characters are drawn around a huge H with a rightwards arrow as the horizontal bar connecting the two vertical towers. Ponytail stands on the left with a raygun looking leftwards. Behind her is Black Hat who looks at a girl that might be Danish or Megan (but with longer hair than Megan typically has). She is flying a kite above the first two characters. Behind her and looking up at the kite is White Hat. The H is right behind him, and on top of the left tower sits Blondie looking straight out at the reader with her legs dangling over the edge and her arms resting on her knees. On the arrow sits Megan leaning against the left tower, also dangling her legs over the edge and arms resting on her knees. Cueball stands to her right by the right tower. On top of the right tower sits Hairbun with glasses looking straight right with her legs dangling over the edge one arm resting on a knee and leaning back on the other arm. On the right side of the H is an adult version of Science Girl holding a hand out towards the squirrel which Beret Guy is holding out in both arms towards her. Another Cueball stands on an office chair on the right brandishing a sword looking rightwards. He keeps his balance by holding his other arm out behind him.

Get a ride to the polls―drive2vote.org

If you’re having problems voting―866-OUR-VOTE

If you’re in line when the polls close, they have to let you vote.