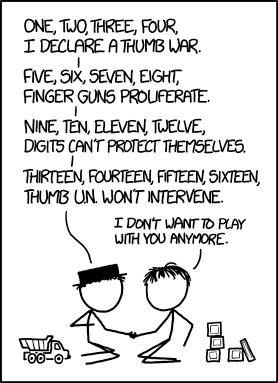 [Two children are sitting on their knees between a toy truck to the left and five building blocks to the right; three square blocks are stacked in a precarious tower and to the right of the tower there is one more square block which has a rectangular block leaning on it. Both children have lots of hair but the child to the left has a black hat on, so they are possibly young versions of Black Hat and Hairy. They are sitting across from each other with one hand touching the other’s hand. Their thumbs can be seen sticking up above their hands.]

Hairy: I don’t want to play with you anymore.