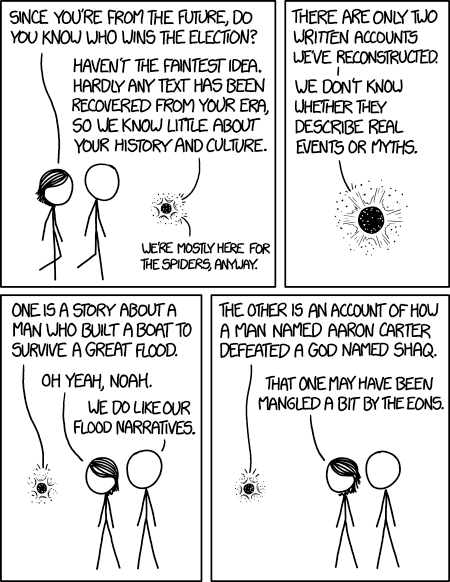 [The Sphere, a time-traveler depicted as a solid floating black energy sphere surrounded by six outwardly-curved segments (first seen in the previous comic), is floating in front of Megan and Cueball who is walking after it towards the right part of the panel. The Sphere looks like this in all panels, but in the zoom in from panel two more details can be seen. A voice emanates from the Sphere.]

Megan: Since you’re from the future, do you know who wins the election?

Sphere: Haven’t the faintest idea. Hardly any text has been recovered from your era, so we know little about your history and culture.

[A close-up of the Sphere, still depicted as a black sphere, but not perfectly round at this zoom level and also clearly with some white dots in the dark area. It is still surrounded by six narrow rays with irregular dots between the rays.]

Sphere: There are only two written accounts we’ve reconstructed.

Sphere: We don’t know whether they describe real events or myths.

[The Sphere is now on the left side of Megan and Cueball who has stopped walking and has turned to look at the Sphere.]

Sphere: One is a story about a man who built a boat to survive a great flood.

[The Sphere has drifted further away from Megan and Cueball.]

Sphere: The other is an account of how a man named Aaron Carter defeated a god named Shaq.

Megan: That one may have been mangled a bit by the eons.