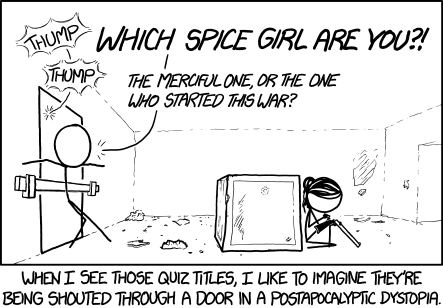 [[A windowless room littered with debris: a door on the left is barred shut and also being held shut by a terrified figure. In the center of a room is a large armored box. On the side of the box away from the door, a figure is crouched down, calmly loading a weapon.]]

[[A CRUEL INTERLOPER, external to the scene and room, pounds on the door and shouts at the two figures in our sight.]]

Terrified figure: WHICH SPICE GIRL ARE YOU?! The merciful one, or the one who started this war?

Caption: When I see those quiz titles, I like to imagine they’re being shouted through a door in a postapocalyptic dystopia.