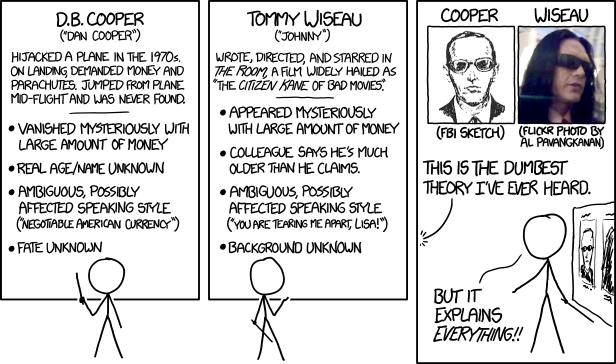 [[A stick person stands in front of a board with a bulleted list, using a pointer to indicate. The board reads:]]

Hijacked a plane in the 1970s. On landing, demanded money and parachutes. Jumped from plane mid-flight and was never found.

[[Again the stick person gestures towards a board behind him which reads:]

Wrote, directed, and starred in

, a film widely hailed as “The

-Colleague says he’s much older than he claims.

[[An FBI sketch of Cooper appears side-by-side with a flickr photo by Al Pavangkana of Wiseau. The person is standing at the board, responding to someone in the audience, who is out of panel.]]

Audience member: This is the dumbest theory I’ve ever heard.

Stick figure: But it explains